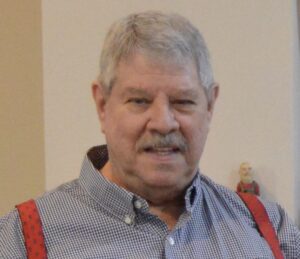 The year 1944 introduced the world to the likes of Michael Douglas, Diana Ross, Joe Cocker, Danny DeVito, and the legendary Pat Murrah.

Pat Murrah, Senior was born on the Naval Base in Jacksonville, Florida on. September 15, 1944. He was the first born son of Cecil and Amy Murrah of Clanton, Alabama. The Murrah family later left Clanton and moved to Ensley. After multiple pranks, shenanigans, and attempting to tackle a goal post during a football game, resulting in the loss of a couple of teeth, Pat graduated from Ensley High School.

Pat later found the love of his life when he met, elementary school teacher, Marcia Morrow. They would marry in July of 1971 and live in Birmingham. After two years of blissful marriage, they welcomed their first born, Kristen. Five years later, they would welcome their second child, Patrick. Soon after Patrick’s birth, they moved to Columbiana.

The two enjoyed spending their retirement together. They enjoyed traveling with their family to the beach and the mountains, searching antique stores, working in their yard, and building his model train layouts. However, his most favorite activities were watching Alabama Football, Roll Tide, and spending every moment he and Marcia could with their grandchildren. Pat loved being known as Big Da or Baba, to Connor, Cade, Elizabeth, and Easton. He and Marcia enjoyed spoiling their grandkids. Pat even bought a golf cart just so he could drive his grandkids around their yard. It was hard to tell who had more fun, Pat or the grandkids, as they raced around.

With his family by his side, Pat peacefully passed away May 5, 2021.

Pat is preceded in death by his parents, Cecil and Amy Murrah and his oldest grandson, Connor Jacobs.

Pat is survived by his wife of fifty years, Marcia Murrah, his daughter and son-in-law Kristen and Jack Jacobs, his son Patrick Murrah, and his grandchildren, Cade Murrah, Elizabeth Jacobs and Easton Murrah, his favorites, second only to Marcia.

Pat was loved by many and will be tremendously missed. But we all know he is having a wonderful time playing a mean game of baseball, and probably football, with Connor.