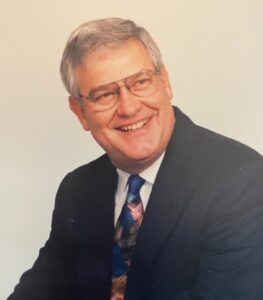 Raymond Stevens Grant, Jr. (Ray) was born on August 6, 1930, in Springfield, Massachusetts, to Dorothy Elise (Gray) Grant and Raymond Stevens Grant. He was the oldest of three children. He was preceded in death by his parents, his sister Joan Elise Closs (1940-2005) and his brother Robert Ernest Grant (Bob) (1933-2017).
Ray went peacefully to be with the Lord on April 1, 2022, at his home in Helena, Alabama. Family were blessed to spend time with him at home in the days immediately prior to his death.
Ray grew up in Springfield, Massachusetts, then in Westfield, New Jersey. He graduated from Colby College in Waterville, Maine, in 1952, then from Yale Divinity School in New Haven, Connecticut, in 1956. Ray was active in the National Student Council of the YMCA. While serving as its President, he was invited to accept a one year position at the World’s Alliance of the YMCA, whose headquarters were in Geneva, Switzerland. He was vital in preparing for the International Centennial Convention that was held in August 1955, in Paris, France. This one year assignment was between his junior and senior years at Yale Divinity School. After completing that work, Ray returned from Paris and completed his final year at Yale and was ordained as a United Methodist Minister.
Ray first served as pastor in Frenchtown, New Jersey, then in numerous pastorates in Kansas. Ray served as Kansas City District Superintendent, then moved to Topeka, Kansas, to serve Lowman United Methodist Church for 12 years. Ray then retired from the Kansas East Conference and accepted the position of full time Chaplain at Aldersgate Village, a United Methodist Retirement Home in Topka. He had served as President of the Board of Trustees, so he had a good understanding of the home. Ray served 44 years in ministry. While in Topeka, Ray served as board member, then President of Habitat for Humanity. During his 13 years with Habitat, 36 houses were built in Topeka, as well as many renovated. In 2000, Ray retired again, and moved to Helena, Alabama to be near family.
Ray was married to Joyce Gill in 1955 and they had two children before they divorced in 1970. Catherine Ellen (Grant) Farah has one son, Christopher William Mitchell and Gregory Thomas Grant (Stephanie) has two children, Cameron Raye Grant and Sydney Grace Grant. Cathy and Greg were grown when Ray remarried.
Ray married Marilyn Cordell Grant (Lyn) on June 5, 1983. Ray and Lyn have been married 39 happy years. Lyn had two children, Judith Elaine (Meyers) Evans (Scott) and Michelle Helene (Meyers) Schneider. Judee has two children, Marilyn Frances Evans and William Henry Evans. Michelle has one son, David Ray (Davey) Schneider. Judee and Michelle were blessed to grow up with Ray as their stepdad.
Ray enjoyed music, having been in several high school musicals and attending shows on Broadway in his early years. He played the piano, sang in the choir at Lowman UMC, and played in the bell choir. Lyn, Judee, and Michelle enjoyed hearing him play the piano at home. He served as President of the Homeowners Association for 10 years where he lived in Helena. Ray was a leader, an organizer, an administrator, and a wonderful pastor. He loved people and always had a smile on his face. He was good at remembering names and at greeting everyone he met. He was a very caring man and would help you in any way he could. He was also quite a storyteller and the grandchildren enjoyed hearing stories from his early years. His most recent project was working on family genealogies and recording many of his stories.
Ray and Lyn enjoyed many activities together in Topeka and in Helena. They ushered for numerous events in Topeka and attended operas, community events, and of course church events. They were a team and enjoyed serving together. They continued to usher in Birmingham, serving at Red Mountain Theater and Virginia Samford Theater until Ray could no longer attend. Family, travel, music, and theater were their favorite times. Trips to see Michelle in California, Cathy in Charleston, SC, and Greg in Jacksonville,FL were made as often as possible. Judee lived up the street, so travel was not required. The entire family spent time in Maine whenever they could. Ray’s parents were from Maine and he had grown up spending lots of time there with extended Grant family. It was a very special place for him to be with his own family!
Ray and Lyn attended First United Methodist Church in Birmingham, Alabama, the church where Lyn grew up. They were members of the Ecclesia-Wingard Sunday School class.
According to Ray himself, he lived a happy life. Ray always had a smile on his face and a story to tell. He was dearly loved by his family and his many friends and colleagues. He will be missed very much, but his family is thankful and blessed to have had him, his love, caring, positive influence and his wonderful smile in their lives for so many years!
A Celebration of Life service will be held on May 7, 2022 at First United Methodist Church, 518 19th Street North, Birmingham, Alabama, 35203. Visitation will be from 12:00-12:45 pm in the chapel. The service will be at 1:00 pm in the sanctuary.
In lieu of flowers, the family suggests contributions to UMCOM, United Methodist Committee on Relief. This organization helps in many countries where people are hurting, such as Ukraine presently. Here is a link: Https://umcmission.org/UMCOR