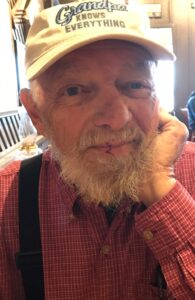 1947 in Lansing, Michigan to Lloyd and Pearl Hilliker. Rob is preceded in death by

both parents, sister Mary Bickford and brother Dale Hilliker. He is survived by his

wife, Sally Hilliker whom he married August 31, 1984, at Oakmont Presbyterian

where they met. Rob is also survived by his sister, Alberta Clare of Battlecreek,

that time were serving on the USS Kittyhawk. Rob attended Nazarene Bible

before moving to Alabama. He worked for the Shelby County school system as he

maintenance technician at Pelham High School for 20 years, retiring in 2013.

Rob love to fish, play guitar, sing in the church choir and spent many hours

tackling the endless to-do list of his mother-in-law. Rob was a long-time member

Chapel Presbyterian. Clay Farrington who a favorite minister during Rob’s time at

Church in Hoover, AL. The family will receive friends for a short time

In lieu of flower, the family requests donations be made in Rob’s memory to