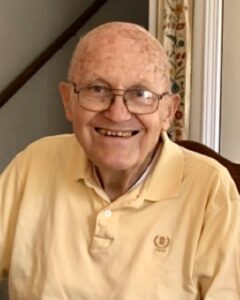 where he met his wife of 70 years, Peggy Owens Best, who survives him.

He is also survived by his children, Betsy and Bill (Tracy); his grandchildren Mandy, Stephanie (Jacob), Jenny (Jenn), Ryan (Katy), and Sandy (Brian); and his 11 great-grandchildren.

Bill was a wonderful person. He had a great sense of humor, and teased everyone—even

strangers. He knew the shortest distance between two people is a laugh. He called his great-

grandchildren “Jughead,” when he couldn’t remember their names, somehow making them feel

even more special and loved.

He served in the Navy during WWII, and then worked for Goodyear Tire & Amp; Rubber Co. in Akron, OH; Kansas City, MO; Los Angeles, CA; and Scottsboro, AL for 30 years before retiring.

He and Peggy then went on to manage condominiums on Marco Island &amp; Naples, FL.

They retired “again” spending several years in Ocala, FL before moving to Alabaster, AL in 1997.

One of his passions and greatest gifts was wood-working, filling shelves upon shelves with

beautiful, intricate carvings. He was the quintessential Do-It-Yourselfer and had an inspiring

workshop. He was a Boy Scout troop leader for over 50 years, passing on his love for the great

outdoors to both his scouts and many of his grandchildren.

In recent years when his wife, Peggy’s hearing and sight started declining, he would sit beside

her on the couch at family gatherings, and hold her hand, narrating what was going on around

her. He loved her so deeply and so well. He took such good care of her and his family as long

as he was able. Now he has gone ahead of her, and he will make sure that when she joins him,

she’ll have a seat beside him, and he will make her laugh and they will hold hands. His family is

grieving his loss but celebrating his wonderful and generous life.

A private, family memorial service will be held at a later date. In lieu of flowers, please consider

making a donation in his memory to his church, BPUMC, or to Children’s Harbor, a non-profit

serving children with serious illnesses and their families. Over the years Bill carved more than

16,000 small wooden toys and ornaments for the children and their families to paint and keep.

Children’s Harbor always held a special place in his heart.